When Bob and I graduated as Practitioner Coaches with The Academy of Executive Coaching https://www.aoec.com/coaching/executive-coaching/

Our graduation took place at the Royal Society in St James. The Royal Society’s motto is 'Nullius in verba' which is taken to mean 'take nobody's word for it'. They state on their website that it declares the determination of their Fellows ‘to withstand the domination of authority and to verify all statements by an appeal to facts determined by experiment.’

So, it was apt that a bunch of coaches should be in a building aspiring to such heights!

Our guest speaker was the head of talent development at Ambassador Theatre Group who shared with us how he has used his coaching as part of his leadership development programmes. He also shared a very moving story of how he realised one his leaders required real attention.

By asking him to go for a coffee, he was able to help this person start the process to address and get help for his depression. He was there for him. One of Paul’s team was able to open up and be very frank with him over just how bad things were. The biggest thing he gave him, was his time. He was working with him that day. He could tell he wasn’t right and he asked him to go and talk. He listened. He didn’t judge him and he gave him the space to talk.

The “I’m here if you need me, do ask any questions at any time,” just doesn’t work with some people. Many of your colleagues and friends outside work won’t ask for help, or even know they need it.

Give that work colleague who needs it, your time. 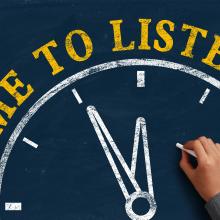