This blog post is aimed at any Sales Managers, Sales Directors and Salespeople who are curious about sales techniques.

Like many, I have been enjoying the Georgian romp that is ‘Taboo’ on a Saturday night, starring Tom Hardy, scarily good as James Delaney, fighting the Crown, the Americans and the East India Company for land rights and gunpowder in 1814.

Bizarrely, he has also unwittingly created a new type of sales ‘close’.

His character has to deal with all manner of aristocrat, beggar, murderer and thief. In these exchanges, he says almost nothing until he has to. His laugh is a chuckle that sounds like a dog’s bark. When he does speak, the sentences are short. On a number of occasions he says things like:

‘You will bring my father’s trunk of documents to the house, yes?’

‘You will find me the chemicals you need, yes?’

And the ‘yes’ has an upward inflection ‘ye-es’. So, he’s telling them that they ‘will’ do something.

So, if we translated it to buying a drink at the bar it would be the equivalent of the bar man saying ‘A large one, yes?’

Or if you were selling a holiday it would be like saying ’So you want to book the 4 star, yes?’

Now you could say it’s slightly rude to be so direct, but in Tom’s case, in that character, he has little choice!

However, this is a useable close, right now on your TV screens!

If you haven’t watched ‘Taboo’ it’s available on catch-up – just watch out for bad language, and scenes that some viewers may find offensive! 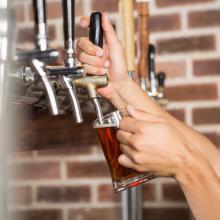