Remove Your Doubts by Replacing ‘If’ with….

In 1993 I was working as a waitress in a cocktail bar, that much is true....... Alright, a waiter, in Café Boheme in Soho where I had moved from behind the bar making cocktails. I had heard I could get more tips as a waiter, the puzzle I had to crack was how?

I found a book written by a New York waitress.
It was called something like, How to make Big Tips as a Waiter. It was a revelation.

It had short chapters on everything from shining your shoes, drawing smiles on bills, how to use mints and chocolates as rewards, the book was full of lessons in approaches to impress and persuade, through the short interactions a waiter would have with diners.

I have never had such a sublime sales and language lesson delivered with such brevity, and yet such depth.

As I approached my couples and groups each evening, when it came to pudding, as we say in the UK, “I removed my, “Would you like a dessert?” and banished it forever to Room 101 and replaced it with, “Which dessert are you going to have?”

If they were a couple and they were on the point of declining, not wishing to look to gluttonous I would smile, lean back a little, and with a slight raising of my eyebrows and a nod say, “Which dessert are you going to share?”

Bingo. Sales up. Conversion rate smashed. It hung around 90% thereafter.
I earned the most tips on the floor, £100 a day, again back then, this was great dough, it is good now. I would even reward myself with an occasional mini cab back to my Peckham Penthouse if I went north of that figure and have a night off the night bus.

Sales Leaders and Sales Managers – do you live in a land of ‘If?’ or ‘Which?’
It is as simple as the decision between New York Cheesecake and Sticky Toffee Pudding.
As a waiter do you wish to deny my taste buds meeting the delicious whipped smooth cream, then being assaulted by the light lemon zest as my teeth sink into the robust buttery biscuit base?

Or let me leave your eatery without first enjoying a very moist sponge cake, made with finely chopped dates, covered in a just rich enough toffee sauce served with lashings of vanilla custard?

And yet there are waiters right now letting people leave without this experience, it is verging on criminal.

Whatever your teams are selling, when they go to work with the If in their head, they will invariably perform far less well than the Which merchants among us.
They require the three B’s for starters, Belief, Belief, Belief! 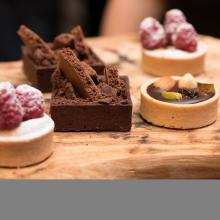