This month, the Reality Training team took part in our biannual Team Building day.  This time, it was the turn of Bob Morrell. As usual, the day was planned in secret, and only Bob knew what the day had in store for the team. The only piece of information given to us by Bob about what we would experience was that the theme of the day was 'what is great customer service?'

We were told to meet at London Euston Station, and from there we were given a series of locations to visit, and pictures to take at said locations.

At first, you’d think that Bob was sending us on a tour of stereotypical tourist destinations across London, but instead, we discovered lots of hidden gems across the capital.

Our first destination was 221B Baker Street, the fictional home of Sherlock Holmes. After taking pictures of the house, as well as taking a quick wander inside, we were instructed to stroll down New Bond Street from Oxford Street, and head towards the Burlington Arcade.

On the way, we stopped by the Cartier shop and showed an interest (well pretended anyway!) in a line of ladies’ watches. Looking at the watches, the assistant gave us rigorous info and the different stylings we could consider as if this was a standard line of watches. Then we asked the magic question of cost, learning that the average price was £20,000! We acknowledged the price tag as if that’s what we assumed, even though inside we feeling shock, and then envy at those who could afford such an extravagant accessory.

Following this, we moved to the Burlington Arcade, and entered Hancock’s Jewellers, where the Victoria Cross is manufactured. We went inside and learned lots about the history of both the Jewellers, as well as the Victoria Cross. The assistants inside the store knew we were not interested in buying any jewellery, but were still happy to provide information with great detail and enthusiasm.

From there, we strolled to Piccadilly Circus, and then to the Ritz Hotel for some wonderful cocktails. The cocktails were expertly made by the barman Daniel, who made delicious and well decorated cocktails (please see the image below), as well as provided some interesting conversation. Now these cocktails did cost a pretty penny, but they tasted delicious, and watching Daniel make the cocktails was a true spectacle. The price you paid wasn't just for the drink, but also the presentation and show that was given to you during the preparation. We were happy to pay for we would describe as a service, as well as a product.

Inbetween these stops, we also visited Hatchard’s, which is the oldest bookshop in London.

Our final stop was Langan’s Brasserie to have lunch. Another great example of truly brilliant customer service. We were offered pre lunch drinks at the bar, a coat room to store our belonging, and Jeremy was even offered a charger to power up his phone! 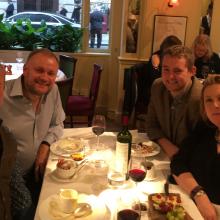