Is it hard for people to apologise?

Someone recently observed to me that she thought that some men have it drummed into themselves, to never apologise. Or at least, to never apologise to a woman. In her career she had experienced a number of male colleagues who had over-reacted to situations and exploded, only to be shown that they were entirely wrong, In those circumstances most of us would naturally apologise for our previous behaviour.

I would say that some men and women, have a principle, which may be ingrained from childhood, to ‘never be seen’ to apologise. Their egos are built up to a level where they expect others to react and if there are issues then that is everyone else’s problem, not theirs – even if they’ve caused it!

One story I heard was an appraisal, when a male manager accused a female colleague of several small infractions. All were dreamt up, made up, or wrongly conceived. When this was proven you would expect an apology. But no. This was too much of a stretch for him – he was actually annoyed to be proved wrong and tried to go further to prove his contentions. So appraisal becomes a personal abuse session. This is really poor management and a total lack or self-awareness. It’s also probably illegal. Anyone in a position of power, male or female, has the ability to think of themselves impregnable when it comes to making mistakes, or getting the wrong end of the stick.

Some say that to apologise shows weakness, and clever people will then exploit that weakness, so never apologising is a defence mechanism. What about simple politeness? Manners? You’ve made a mistake so own up to it. Additionally, we all get annoyed by people who over-apologise for everything - just say you’re sorry, sincerely, and move on, remember, lest ye judge too harshly, nobody’s perfect. 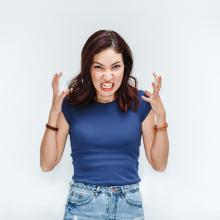