The Integrity Issue in Sales Teams

When I was a new Account Manager, with my territory, company car and mobile phone, I travelled around Central England and West London, selling advertising to large companies.

Every month, we had to sell a certain number of ‘advertising pages’ to fill the magazine. These adverts varied hugely in price, dictated by what the advertiser had paid for their adverts over the previous 20 years.

Our job was to create a revenue, per page. We were told repeatedly what we were supposed to be selling these adverts for. All except on the final day each month before the magazine went to press.

On that day, our Managers looked at the number of empty, unsold pages, and panicked. They then pressed us to sell the remaining space for literally anything we could get – it was called ‘late space’.

So, integrity went out of the window and we called round a special list of low-cost advertisers, who would buy adverts at knockdown prices. This was a mistake of course, because these people would never go on to pay full price for their ads.

It was fascinating that we were expected to show integrity at all other times, but abandon it, on the last day, when we were encouraged to lie about ‘unreceived artwork’ and ‘additional features’ being run.

This showed us our managers were unable to run the business any differently and were actively encouraging us to abandon our rates in order to fill the magazine. There’s no doubt this type of management contributed to the failure of many magazines, because the average amounts of money paid for advertising over this period, never really increased.

I spoke to a business advertiser recently who said nothing has changed. Every month he is called to buy cut price adverts, and then questions the integrity of the publication, because it’s so unnecessary.

So, my challenge is this. Right now, you are planning for the resumption of business and revenues. Please do not abandon integrity to chase revenues. Businesses must make profits to survive, and to create a financial buffer, but customers want to buy from brands who show integrity around price and everything else. If you encourage the wrong behaviours which are rooted in low integrity, then you could make things far worse for your business. 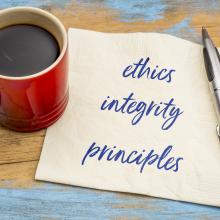