Winston Churchill Knew What to Say

A couple of our daily videos which we broadcast on Facebook, have had a very high audience and it’s because we focused on someone famous, firstly Florence Nightingale and secondly with some quotes from Winston Churchill. Leadership right now is very hard because no leader, no matter how experienced, has had to try and lead through times like this. Churchill lived an amazing life even before he became Prime Minister in 1940, and he also read thousands of books which created a rich vocabulary, and he became a politician when speeches were written down and reported via newspapers – so the importance of clarity and being memorable in your language was even more important, in case your words were reported incorrectly.

Here are 4 key quotes of his, that are entirely right for the current situation:

‘Success is never found, failure is never fatal, courage is the only thing’.

‘One ought never to turn ones back on a threatened danger and try to run away from it – if you do that, you double the danger. But if you meet it promptly and without flinching you will reduce the danger by half. Never run away, never.’

‘Victory at all costs, victory in spite of all terror, victory however long and hard the fight may be, for without victory there is no survival.’

‘Without courage, all other virtues lose their meaning.’

That last one is essential for leadership. You can be an amazing strategic thinker, a great manager of information and analysis but without the courage to express it and make something of it – what’s the point? You may have masses of talent in different areas of your life, but without the courage to show people, where is the value in that talent, and how will you know how good you are?

Life is hard and will be harder than we’ve known for a good while to come, so, accepting that, meeting it head on, with courage, we will come through these times more successfully. 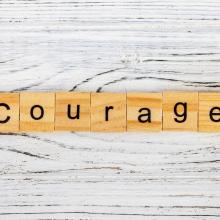