How to Make Your Own Luck

He was good enough to have become a pro and yet he was discouraged by his parents, and instead he became a very talented artist, a top amateur golfer and a great salesman.

He was a huge fan of Arnold Palmer and told me the story of how when Arnold Palmer was beaten by Gary Player at a major tournament, a member of Arnie’s Army, as they were known, shouted at Gary Player as he sank his final putt, “Mr Player you only won because of luck!”

Gary Player found the voice in the crowd and approached him saying, "Well, the harder I practice, the luckier I get."

As we played pitch and putt at Sandown, my Father would remind me of this story. If ever I won and I had been practising, so I never felt I had beaten my old man due to luck. He wanted me to know I deserved it.

How many people do you know who are lucky? Truly lucky, in life, in work, relationships and in wealth and health?

Most of the people I know who have achieved things personally and professionally have done so through working hard, working smart, studying, training – developing themselves, learning and making the right tweaks and adjustments to get better and achieve more.

I’m not talking about inherited skills or genetics. If you think someone is lucky because they are pretty, sporty, have a lovely voice, have great skin, can run wonderfully well – these are gifts that should not be squandered.

You can make yourself have a better chance at getting a good result by developing your knowledge and skills and then crucially by practising hard before the day, the meeting, the phone call, the exam – whatever it is where you will be exposed, judged and an outcome will occur.

When opportunity knocks and you are given the chance it is how well you seize that opportunity and make the most of the door that has opened.

As Whoopi Goldberg says, “things happen to you out of luck, and if you get to stick around it is because you are talented.”

What can you do right now to guarantee you get to stick around? 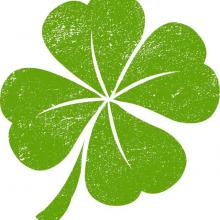