Don’t be too proud. Work is work

This is the last in a series of short blogs on observations taken from Arthur Miller’s play, which I was lucky enough to see the latest revival of.

Willy Loman’s neighbour is Charley.  He has been playing cards with Charley for years and their boys have grown up together. Charley’s son didn’t skip his classes in the way that Biff, Willy’s eldest did and is now a successful lawyer.

Willy goes to see Charley to borrow money to pay off his debts. It becomes clear that this isn’t the first time Charley has bailed him out. Despite his desperate position and his less than stable disposition Charley offers Willy a job at fifty dollars a week.

His pride won’t let him accept the offer, and yet he will accept the handout. This is an interesting interpretation of pride. With no intention to pay off the debt or to repay the debt by taking a job with Charley, Willy falls deeper into his turmoil of lost chances and dreams of escape which he chose not to take a chance on as a young man.

You have all heard the expression ‘be kind to people on the way up as you may well meet them on the way down’. Willy has always been an amiable fellow so his inability to rise above his self-imposed and incorrectly measured integrity makes this decision not to work with Charley his final downfall. 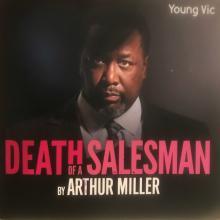