This is the famous maxim of Elmer Wheeler who made it number 4 in his 5 Wheelerpoints. The original book which contains this gem is ‘Tested Sentences that Sell’ first published in 1937.

I had great success with which when I worked as a waiter and I continue to use it to help my clients make choices today.

For this article I’m going to expand the point beyond each and every interaction and instead position which as a mindset.

Consider two business owners who get out of bed in the morning. One wonders if they will have a good day, if the team will have faults to fix, if they will bring in any new business, if an existing customer will place another order.

The other wakes up with their which face on. They are wondering which of their team will have new ideas, which idea will be the one with the most heat around it, of all the things they must focus on which requires the most attention. When it comes to business generating activity which will be the questions that get the customers really thinking, which of their solutions will be the ones people are most intrigued by and which, yes which, will they make deeper enquiries into?

I often tell the story of the inspirational Irina, owner of a small chain of shirt shops in France, the UK and Germany. She leads her organisation with a which mindset.

When I first met her, she asked me “Which type of cuff do you wear for work, single or double cuffs?” A few minutes later I had bought three shirts and decided to hang about and watch her in action.

The next customer walked in, she approached him looking a little longer at his tie before meeting his eyes with, “Which strong single colours do you also like when it comes to ties?” The man paused and came back with, “pink mostly.”

Irina continued, “which is it today, shirts or ties?”

When he had left with a new tie and set of cufflinks, I approached her.

“I’m so impressed by your attitude and your ability, you must be the top salesperson here.”

She held out her hand, “Irina, maybe a little more than that, this is one of my shops, my husband and youngest daughter are in town with me this week, and I like nothing more than being able to travel with them and spend some of my time selling in my shops.”

I went on to learn that when she interviews any new supplier and before she places a new order at her trade shows such as Pure London, or Premier Vision Paris, big fashion and shirt shows, she asks her team, “Which shirts do I not have in stock?” “Which shirts do I need to give you to help you give our customers shirts they will love?”

Now that’s a businesswoman leading her operation with a which mindset.

Changing from If to Which 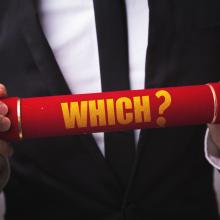